My name is Jeff Shelton, and I am the owner of Wholesale Warranties. I would like to extend my gratitude to our customers for allowing us the opportunity to be a proud supporter of the Coach-Ed charitable organization. Moving forward, we will be donating a portion of each policy sold to support this organization, which is dear to our hearts in so many ways.

Coach Ed’s story has been a true inspiration for our team at Wholesale Warranties, and has taught us so much about what it takes to overcome insurmountable obstacles and appreciate every moment we are lucky enough to be alive.

As a child Edward Sayer, “Coach Ed”, suffered many illnesses. Ed powered through an assortment of ailments, from a collapsed lung as a baby, to trouble breathing and inability to gain weight, all considered complications of “asthma and allergies”. Despite this suffering, Coach Ed continued to stay active and compete in as many sports as he could. Eventually, Ed caught a cold that escalated drastically, requiring him to be hospitalized. After a series of tests, Coach Ed was diagnosed with Cystic Fibrosis, a terminal genetic disorder that affects the lungs, pancreas, liver, and kidneys.

Although he was devastated by the news, Coach Ed wasn’t ready to die or give up his 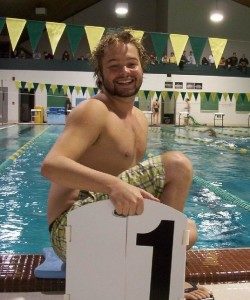 active lifestyle. He was a true self-motivator, committed to living as long of a life as possible. Ed sought to learn everything he could about health and fitness, knowing that this dedication would extend his life and make breathing easier. A participant in many sports, Ed thrived in the pool, where he trained 3 hours a day, 6 days per week. As time went on, his life became a cycle of 3 weeks in the hospital, 3 weeks out, but he remained committed to training with every opportunity he had. This interest in health and science inspired Ed to attend Clarkson University where he received his B.S. in Chemistry, graduating with highest honors. He swam on the NCAA team throughout college, and captained his team during his junior and senior years. Unfortunately, his despite his best efforts, Ed’s health began to take a toll. Edward had to cut his MBA studies short as he was forced to return home to deal with his health issues. He made frequent trips to Mount Sinai Hospital in NYC and soon ended up on the list for a double lung transplant.

During the last summer of his l

ife, Ed stayed active with his sister, and dreamed of finding a cure for Cystic Fibrosis. Edward and his family often discussed starting a foundation together to encourage other patients of the disease to stay active and fit while battling CF. Sadly, in the fall of 2005 Edward lost his battle with CF before they could turn that dream into a reality. But the work wasn’t done–Ed’s sister and friends are still working to achieve his goals in the form of the Coach-Ed organization. Coach Ed’s incredible life is just one of the many catalysts for our support of this amazing foundation.

How Coach-Ed changed the Lives of Those at Wholesale Warranties 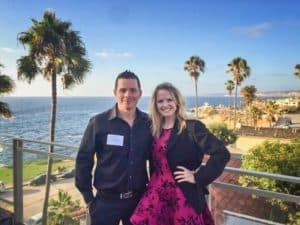 Several years ago, while discussing business with a friend, I was introduced to a wonderful young woman named Klyn Elsbury. Since we were on the topic of business, she told me about her experience finding top talent as a recruiter. I was so blown away with her knowledge, expertise, and love for recruiting and life in general that I did everything I could to get her to help our company. At that point, I was having extreme difficulty finding a high quality manager that was as passionate about offering Extended Warranties as I was. In the months that followed, Klyn Elsbury not only helped find one of the most experienced, knowledgeable managers I could dream of, she also quickly helped find 3 highly qualified warranty specialists, and 2 expert customer service representatives to join our team.

Klyn’s skill for recruiting and work ethic was impeccable, but there was something about Klyn that I felt was a bit odd. There were several times when she spoke of getting “fired” from more than one recruiting company for taking too much time off. She also stated that the main reason she started her own company was so she would not have to worry about going into work each day, and could take time off whenever she needed. Klyn was dedicated to a healthy lifestyle, and spoke passionately about her love for fitness, and becoming a Zumba instructor and personal trainer. In passing, she also expressed her disappointment with having taken a month off with very limited exercise. As a hard working entrepreneur myself with a lifelong interest in fitness, these things just didn’t seem to add up for such a remarkable young woman.

Then one night at a dinner meeting, Klyn began to cough, 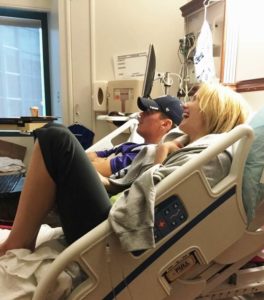 and this lasted for several minutes as I become increasingly concerned. After asking if she was okay, she calmly told me that she was fine and wasn’t contagious, she just had this thing called Cystic Fibrosis. She told me that this was a normal part of her life, no big deal. It wasn’t until the next morning when I googled Cystic Fibrosis with tears running down my cheeks that I came to understand what that really meant. Everything I knew about this remarkable young woman started to make sense. The reason she was “fired” from most recruiting firms because she needed “personal” time wasn’t because of poor work ethic, it was for the month-long hospitalizations she endured fighting the disease. She didn’t take time off from workouts because she wasn’t motivated, it was because it was difficult to exercise while attached to an IV pole for weeks at a time.

After my research, Klyn met up with me to discuss everything I had learned about her illness. She went into great detail on all of the challenges she faces fighting this disease, and spoke of gratitude she feels for the many loving people she has in her corner to support her as she battles this illness. Klyn also told me of an organization she credits as saving her life by providing the motivation and resources needed to stay healthy despite the incredible pain, frustration, and sickness that is brought on by this disease. And of course that organization is called Coach-Ed.

Although I have never met you Edward Sayer, I am forever grateful for the inspiration that has changed the lives of so many, including Klyn Elsbury, who has made a difference in the lives of everyone at Wholesale Warranties. I would also love to thank you, Klyn Elsbury, through you Edward is passing on an amazing legacy of kindness and generosity.

Klyn, you are the most inspirational person I have ever met. I am so proud to have you as my recruiter, partner, and girlfriend.

Wholesale Warranties is proud to be sponsoring this organization in honor of Edward, Klyn, and so many others who inspire us everyday. If you would like to learn more about Coach-Ed, please visit their website by clicking here.

To learn more about our “Wholesale Warranties Cares” efforts, check out our YouTube channel.